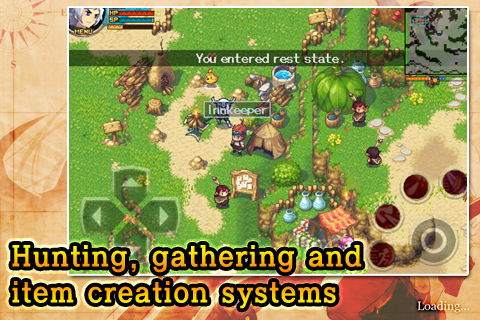 Game play: This game has the same basic principals of all other rpgs on the app market. But, where this game differs from other KRPGs like Zenonia is that you can have a pet and you don’t just pick up the items off the ground, you have to scalp the animal for its items. There is also a day and night cycle where the monsters get stronger at night. This adds more strategy to the game because it forces you to think about whether or not you want to tackle the boss now or when it is lighter. When you first start the game you can pick from three classes Warrior, Tanker, or Scout. The Warrior is the strongest and can handle two handed weapons. The Tanker is the most defense oriented unit and is not easily knocked down. The Scout is very good and handling dual wield weapons and confuses enemies with its swift movements. My personal favorite is the scout because of the dual wield function. You can craft your own armor in the game from recipes gained form monsters and is the cost effective way to do it because most shops are overpriced in the game. Crafting is probably the best way to get items because it is relatively easy and it yields you more advanced items. You get 3 stat points every level which you can invest in 4 different attributes.


Plot: You start off in 1412 bc and your boat, the Frontier is shipwrecked on a island. Your girlfriend is a Adventurer and does not want you tagging along after you nearly get yourself killed trying to save her. This starts your quest to become a adventurer and prove yourself to Lamia. The plot is light and is very funny in parts.

Pet System: You can capture almost any creature you fight in the wild and turn it into your pet. You can also capture mini bosses that you fight. There are three types of pets Looting, Fighting, and Boost pets. Looting pets loot the creatures for you. Fighting pets help you defeat your enemies. Boost Pets boost up your stats.

Graphics: They are high quality and are better than Inotia 3 graphics. The animations are very fluid though there is no retina display though the pixels themselves are very clear. The monsters are very diverse and the weather conditions are beautifully animated. All of this makes the game feel very unique compared to other Rpgs.


Sound/ Music: Music is very peaceful and goes perfectly with the sounds of the in game battles.

Translation: The game is translated well except for a few misspelled words which do not hamper the game play.

Conclusion: In conclusion I give this game a 9/10 because of its amazing storyline, expansive game play, and its ground breaking pet system.